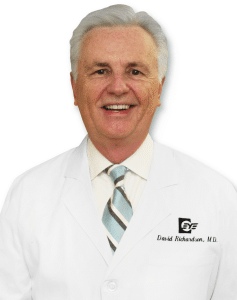 Hattiesburg Eye Clinic’s Dr. David Richardson remembers clearly what he was thinking when he first saw a picture of his eye taken last May with Optomap, a new type of retinal imaging camera.

“I told the company representative, there must be some mistake,” says Dr. Richardson. “This has to be the image of another patient – it can’t be mine.”

Jim Brennan with Optos, which provides the Optomap system, was demonstrating the new device to the clinic’s physicians and was using Dr. Richardson as a test subject. The image, which captured a wide panorama of the retina on the back wall of his eye, indicated an abnormality – and not necessarily with his vision.

“Viewing a patient’s retina primarily helps us diagnose vision problems, but it can also indicate problems elsewhere in the body,” says Dr. Richardson. “And that’s what I saw when I looked at the image of my eye –a possible blood vessel blockage somewhere else in my body.”

Brennan assured him the demonstration camera had never been used before and that his eye was the first one imaged by that particular unit. Alarmed, he called Dr. Robbie Robbins, a cardiovascular surgeon who set up a cardiac CT scan a couple of days later on Friday. After undergoing the procedure, Dr. Richardson went home. A few hours later, Dr. Robbins called him.

“He asked me what I was doing,” Dr. Richardson recalls. “He then said, ‘Don’t do anything strenuous the rest of the weekend – I have a heart catheterization set up for you early next week.’”

The CT scan had revealed an occlusion of the left anterior descending artery of the heart, known commonly as the “widowmaker” artery. Heart attacks involving it are extremely dangerous and life-threatening.

But the plan for further action didn’t wait for that next Tuesday, the day after Memorial Day. When he began having chest discomfort Saturday morning, Dr. Richardson was admitted to the hospital. After a catheterization revealed an extensive blockage, he underwent emergency cardiac bypass surgery on Sunday.

A few days after the surgery, he called Brennan with Optos. “I thanked him for bringing the camera that day. I believe God used that demonstration to save my life.”

The eye’s retina is a thin layer of cells that line the back of the eye and make up nearly 65% of the eye’s surface. It converts light into impulses and sends them to the optic nerve, which transmits them to the brain. Because of its extensive surface and network of blood vessels and nerve fibers, it’s an excellent indicator for potential vision problems like macular degeneration, glaucoma or retinal detachment, all of which can lead to blindness. But it may also contain signs of other problems in the body like increased blood pressure, diabetes and heart disease.

“We actually see quite a number of cases of general disease during our eye exams. I would estimate that we refer 10 to 20% of our patients to other physicians to check on abnormalities we’ve found,” says Dr. Richardson.

While retinal imaging is a standard part of visual examinations, the Optomap system increases that view, allowing a physician to view up to 80% of the retinal surface at one time, or a 200 degree range as opposed to 30 degrees with conventional techniques. The image can be captured in a quarter of a second and then produced as a high resolution color image on a computer screen for immediate viewing by both the physician and the patient.

The Optomap system is now a part of Hattiesburg Eye Clinic’s diagnostic services, at the main clinic at 100 West Hospital Drive and at the new Oak Grove location 6504 Hwy 98. They’re the first clinic in the Hattiesburg – Laurel area to provide the new system making it their second “First” within a year: they were the first in Mississippi to provide the CATALYS Precision Laser, the first FDA-approved laser exclusively designed for cataract surgery.

Dr. Richardson and the entire clinic team believe Optomap will increase both the speed and accuracy of disease diagnoses. This could potentially help save not only someone’s vision but also their life – as he believes it did for him.

“I truly believe God used what happened that day to save my life,” says Dr. Richardson. “The Optos rep said he hardly ever takes the device to initial meetings with physicians but his company sent a camera to his home two days before he left for Hattiesburg. And, the rep did not order the machine nor could he find anyone at the company who sent it. I don’t believe I’d be here today without that image.”